Home / Blog / How Bad Is Sewage Overflow for Properties and the Environment? 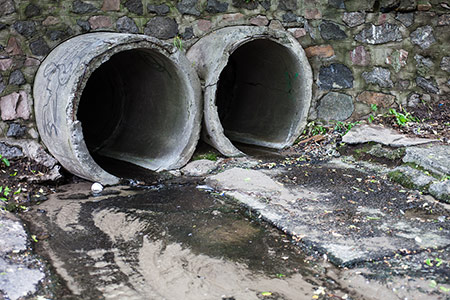 The story where a character is desperately trying to fix the problem of rising water from a toilet bowl sounds like a skit or a scene from a comedy movie. But when the same thing happens to us, we all feel like we’re looking at the breached hull of the Titanic. Sewage overflows need to be treated with urgency since they have sizeable negative impacts on properties and the environment.

Since sewage overflows are made up of human and industrial waste, they carry germs, bacteria and parasites which cause sickness. These illnesses range from instances as mild as stomach cramps to the deadlier diseases like cholera and hepatitis. Inhalation of the odor of and skin exposure to sewage are enough to make anyone sick. Between 1997 and 1998, the Center for Disease Control listed nine outbreaks of diarrheal diseases affecting 1,387 persons who swam in bodies of freshwater. Although the CDC did not list the source of the outbreaks, the diseases are consistent with the ones caused by exposure to sewage like E.Coli and Cryptosporidium.

Sewage overflows can affect aquatic industries. During 1995, as much as 6.7 million acres of shellfish beds were forbidden to be harvested by the government. A staggering 72% of these restrictions cited water pollution as the reason. Fisheries existing in waters tainted by sewage overflows also face the same kind of closure, if not lowered production and lowered consumer confidence in the product. These closures will drive up prices and make consumers suffer as well. Tainted bodies of water will have higher restrictions on factory wastewater discharges. These limits will make factories lower their production and will make companies consider relocating and therefore removing much needed jobs from the local community.

Tourism likewise takes a nosedive when a public waterfront gets closed due to sewage overflow. Small communities that depend on recreational fishing and vacation accommodations see their livelihood dwindle due to less tourist traffic. In 1999 alone, around 7,214 beaches were closed due to sewage overflows across Atlantic, Gulf, and Pacific Coasts along with several in the Great Lakes area as well.

Sewage overflows are considered to be part of the causes of the impairment of waterways. In the 90s, around 40% being monitored by several municipalities across the US were reported to be impaired. Monitors log minerals, nutrients, and metals as the causes of the slowdown and much of these items can be found in sewage.

Sewage can degrade the habitat of listed endangered animals in the US around 50% of which live in aquatic environments. Algal blooms and excess nutrients can cause hypoxia in bodies of freshwater which could kill off fish and wildlife dependent on them.

Property values increase if the house or commercial building is built across a body of water. This is only true if the water quality of the lake, river, pond, or canal in question is good. Polluted waters have a negative effect on the value of properties, making investments lose money instead. Sewage overflows cause wastewater from toilets to back up into the home through the basements. When this happens, water damage can also affect the foundation of the home thereby increasing repair costs for the homeowner.

Should you encounter issues with sewage overflows in your home, please do not hesitate to get in touch with Midwest Remediation at our (317) 826-0940. We can help you with this toxic threat to your health and home.